If someone were to ask me rightthisveryminute what my interests are, I would tell them design. Interior design to be exact. I wouldn't blink. It would spurt out of my mouth without a second thought.
I mean, if you gave me a minute, then, I'd also add cooking/baking, reading, and watching tv. Haha. Oh tv, why were you invented? Though, it IS a fantastic invention, it takes hours from my day (this issue is getting better as months go on, woo!). I'm off track.

Ask me what I'm doing in university, I'll proudly tell you I'm completing my degree in Human Resources and Industrial Relations. This has changed from my original major of Accounting. I never actually declared my major with my university at that point, but I did think that was exactly what I wanted to do. For. The. Rest. Of. My. Life. Then at work I became more and more involved in the training and development of new hires (and actually hiring and orientating them) and I loved it. I do not want to sit in a desk for hours on end crunching numbers.  I do not want to be in a cube. I want to move. I want to explore. I want to make things. I want to get things done.

Ask me approximately 10 years ago what I want to be when I grew up. I would tell you "I'm going to be an interior designer".

I bet you're now wondering why I didn't go into that field. Why I went into business. Why did I waste 4 years (actually ... it's 5 and half -- that's another story!) of my life studying in a field I didn't imagine myself being in at 12 years old. And I wouldn't be able to tell you. Maybe because reality struck (10 years ago I was 12) and I knew it would be difficult to actually become a fantastic interior designer, and impress many. Maybe it was because I didn't feel I could actually do it. Or maybe, just maybe, I thought it was a faze. But here I am, at the age of 22, about to finish my university degree in less than a year, and I still obsess (yes, obsess) over what colour I'm going to paint my walls, or what odd&end I want sitting on a shelf -- heck, what shelf I want! But yet, I'm going into a completely different field.

So did I go in the wrong direction? I don't think so. I'm very much interested in what my field is, and what I can make of it. So I don't think I made the wrong choice, wasted 5 years and loads of money. But I do think I learned something. I learned that I can always change what I want to make of my life. So if it's just loving interior design in my own home, and changing and decorating things in my home. Then that's exactly what I'll do. And maybe one day, I'll end up in the design field in some aspect. Everyone needs an HR Manager at some point right?
Posted by Amanda at 4:39 PM No comments:

Email ThisBlogThis!Share to TwitterShare to FacebookShare to Pinterest
Categories Ramblings

These are the items needed to make Rice Krispie Squares: 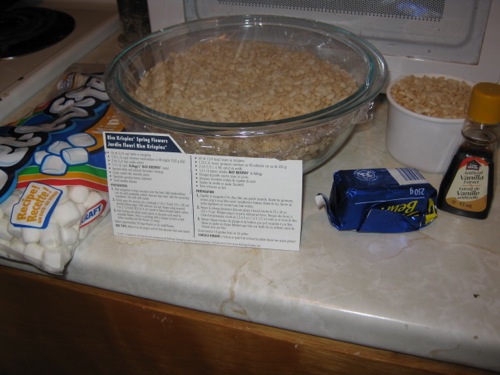 You know, in case you didn't know. Now, these are the items to make Rice Krispie Squares (yes I said that already) according to the Rice Krispie box. You know, the one in the cereal aisle that snap, crackle, and pops. Though, they don't use that as their slogan anymore. It's "Mom's just know" now in case you wanted to know.
Anyways. This was the second time I made Rice Krispie Sqaures this week, because the first time I made them, I used another recipe and it was a bust. (Bust = went really hard and we couldn't cut them! Ahh!) I'm not going to share where I found this recipe because that's just mean. But I will say, you don't make banana splits without banana's, so why, oh why, would you make Rice Krispie Squares without Rice Krispies. Hrm? I know, you don't know! This is what my boyfriend said, he said "they do it right, why would you use another recipe", I came back and said that I just wanted to try it. That's all I wanted to do, but I'll never ever go back. Ever.
Anyways. You want the recipe? I got it for you. Yep, you!
But you'll have to wait until the end.
Get a pot, put it on the stove top, turn the stove top on. Wait until it gets hot.
Add the butter. 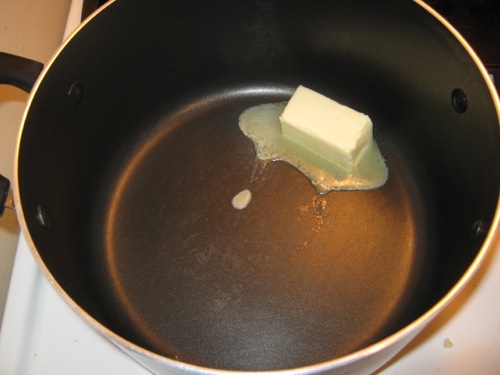 I'll tell you how much later, or you could just go to your cupboard and read the box. I'm sure you have it. No wait! Don't! Continue reading!
While the butter melts, butter your pan. That's right, put your fingers in your butter and rub it all over the pan. It's all good. I won't tell. Just don't lick your fingers in between, now that would be gross. That's like drinking milk from the carton, and we don't do that. Actually I don't even drink milk, unless it's been soaked in chocolate. 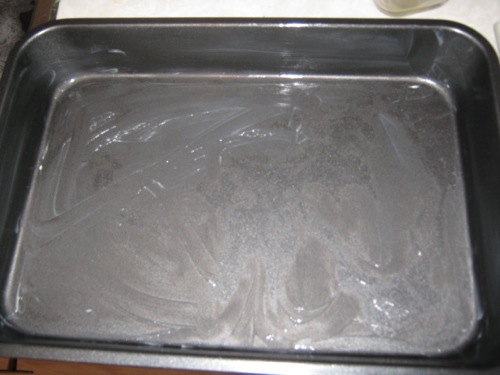 So your butter has melted, yes? Good. Okay. 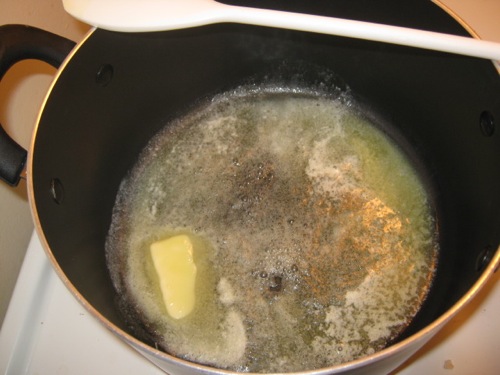 Add your marshmallows. The recipe says 5 cups of marshmallows or one 250g bag of mini marshmallows. I never liked making these with big marshmallows (you'd use 40 if you did it this way). Maybe I'm impatient and the little ones seem to melt faster. So add your 250g less 1 little marshmallow (I'm not sure where that one went, ... ahem, definitely not in my mouth) bag into your melted butter. 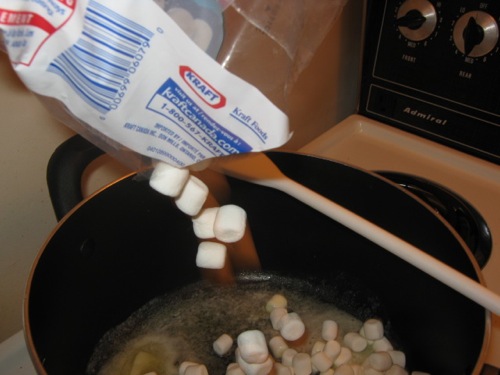 Let it melt. And stir, stir, and stir some more. 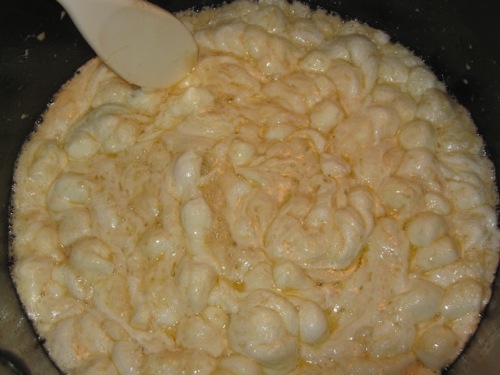 Once all the lumps are gone from the marshmallows. Take it off the heat! Make sure you do this.
Then add the Rice Krispies. And of course you don't need to use brand name Rice Krispies if that's not your thing. Honestly, I've done this in the past, and they just didn't taste the same in my opinion. But if you can't tell than go ahead!
Once it's all mixed up, put it in that buttered pan of yours. 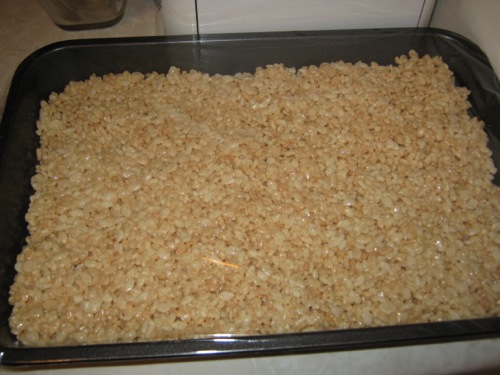 The recipe says to flatten your batch with a buttered wooden spoon, but I use a plastic spoon not buttered and I find it works better.
I would of taken a picture of a piece of it all gooey and stuff, but I ate them all. Oops.
Oh right, the recipe.
1/4 cup of butter (or margaine)
250g bag of mini marshmallows
1/2 tsp vanilla extract
6 cups rice krispies cereal

melt butter in pot on low heat. add marshmallows and stir until melted.
take off heat. add vanilla and cereal. stir until completely coated.
firmly press the mixture into a buttered pan (they say 10 x 15-inch)
cut into the size you want.
Enjoy :)
Posted by Amanda at 12:56 PM 3 comments:

Email ThisBlogThis!Share to TwitterShare to FacebookShare to Pinterest
Categories Food

First, tell your boyfriend the day before to save some of those peppers that are cut up in the fridge so you can have omelets all week.

The next day when you're procrastinating from studying at 3pm, and you realize you haven't eaten anything all day, remember it was a good thing you didn't make those omelets because quesadillas are on the menu for the night.

Quesadillas are a good leftover menu item. You know, after you've roasted that chicken and you have all this left over meat, and you don't want to make soup because it's in the middle of the summer. You make quesadillas. Well, there are other things you can of course make. But quesadillas always come to my mind when I purchase make a roasted chicken.

But tonight, it was on the menu. No look-I-made-it-myself roasted chicken. Just some frozen chicken you almost forgot to thaw in the morning.

If you're using roasted chicken, please proceed to step __.

Cook the chicken in a pan with olive oil, and flip when needed.

Forget to take a picture of said pan with said chicken. Realize it doesn't matter because no one reads this anyways.

Cut the chicken very thin, then in cubes. (That don't resemble cubes, because why would they?) 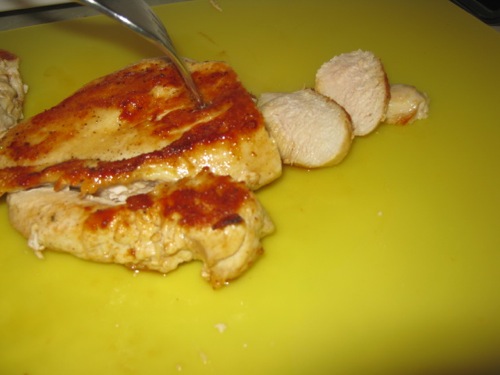 Put everything back into the pan because you're a scared-y cat and afraid you're going to kill yourself from eating not-cooked chicken. Include the peppers. 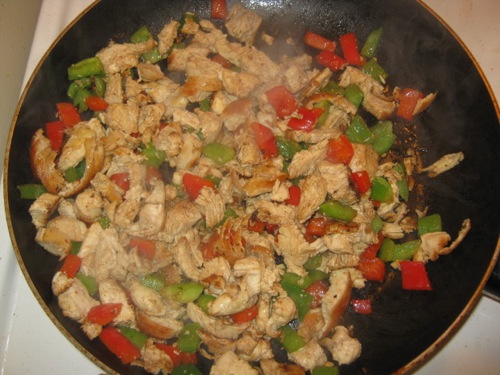 Add some Parmesan cheese to the mix, because you found it in the fridge when you were looking for garlic. (That you didn't have. Or maybe you did, add some in.)

Take out a pan, and aluminum foil, and tortillas of an unknown famous company. OXYMORON .... Ahem. 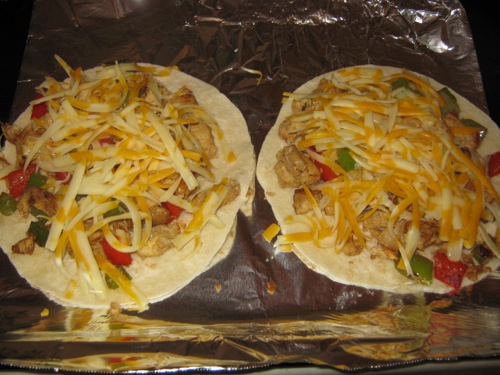 Don't forget the cheese. It's the glue that holds this whole thing together. Eat some first. (DO IT!) Realize you need more glue cheese.

Turn the oven on at some point up (^) there. I turned my oven to 325 degrees. That's probably too high. But I'm impatient when it comes to waiting for cheese to melt.

Sit on the coach with the oven still on and the quesadillas ready, wait for your boyfriend to get home with the salsa because you like eating with him. Show your boyfriend how good of a chef you are because you sandwiched chicken and cheese between tortillas and poured salsa and sour cream on it.
Posted by Amanda at 9:50 PM 2 comments:

Email ThisBlogThis!Share to TwitterShare to FacebookShare to Pinterest
Categories Food

I stumbled into this video over on Design Sponge. I was a bit hesitant at first since there was no sound and some random thing going across the screen. But then it happened, a lovely musical noise. Not only is this video full of DIY fun, created by Julie & Matt of Tiger In A Jar, but the song is catchy too.

Email ThisBlogThis!Share to TwitterShare to FacebookShare to Pinterest
Categories Holidays

Are We There Yet?

As I'm sitting here watching the snow fall down, waiting for my work to call to let me know if I'm going in or not, all I keep thinking about is Walt Disney World. Yes WORLD, no no, not Land. (excuse that.. ahem.) My count down says I'm leaving in 14 days, 15 hours and 49 minutes. Although by the time I get this post done, it'll be THATMUCHCLOSER. Can you tell I'm excited?

So anyways, as I was blogging, (as Brian likes to say, I'm a big blogger. As in, I read a lot of blogs. Daily, hourly, you know, procrastinating from my school life & such.) I came upon a new blog (another one to add to the list -- which actually doesn't happen very often) they were talking about how they went to WDW ... this was back in November (I was snooping through their Archives). WDW is everywhere.

I'll leave you with this video to be jealous ...


Brian (hi Brian!) really wants to go on this Trek, he's been oohing  & ahhing over it for the last 3 weeks. (actually more!) It looks really amazing. The one downside is the PRICE. It's $129.00 per person for a 3 1/2 hours walking trek through the Savanna. And that price is going up to $189.00 just after we leave WDW. Also a few reviews say that it's very similar to the free Savanna adventure you can take in the Animal Kingdom park. I think we're going to decide when we get there.

Behind The Scenes: Wild Africa Trek video from You Tube
Posted by Amanda at 4:05 PM No comments:

Amanda
Hi, I'm Amanda. This is a little spot in the internet for me track the process of making a smile; creating a home from an apartment. You may notice a cat popping up from time-to-time, yea, that's Trinity. She's an independent cat who likes to help write posts by laying on the keyboard and get in my way -- but she's too adorable to resist.